Yes, it seems like a contradiction – in fact it is – how can you expected something that you don’t expect?  What I should be saying is expect to be surprised.  I think I am a pretty seasoned traveller and yet the number of times I am surprised by the unexpected is amazing. 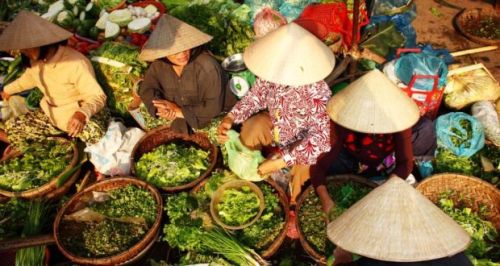 A few years ago, I planned a vacation to Vietnam doing a land and river cruise tour on the Mekong river.  Our journey started in Hanoi where we were due to spend 3 nights at the Sofitel Metropole in the old French Colonial district.

It’s a long flight …. And we arrived late at night.

Our guide was there to meet us and the drive from the airport to the hotel was quite long – well it felt quite long.  I was tired and it was dark.  You know that feeling when you arrive at a new place and it is night time – everything seems weird.  We arrived at the hotel and were greeted graciously by a beautiful Vietnamese lady and finally made it into our room.  I will admit I was grumpy and tired.  My husband suggested we go down and find somewhere to have a night cap.

Miss Negativity replied “Nah, there won’t be anything open – let’s just go to bed.”  But he persevered.

“Come on, let’s go downstairs and see what’s going on.  I’ll buy you a nice gin and tonic.”

“Oh, all right,” I replied ungraciously.  (I can be a bit of a bitch when I am tired!), thinking to myself that there would definitely not be anything open at 11.30 pm.

Well I was wrong…. We walked into the courtyard area and all around the pool were tables and chairs, little lights twinkling in the flower beds, the stars were bright in the sky, ice was tinkling in glasses and a sultry jazz singer was serenading the crowd in French.  Wow!  And I had the best gin and tonic ever! 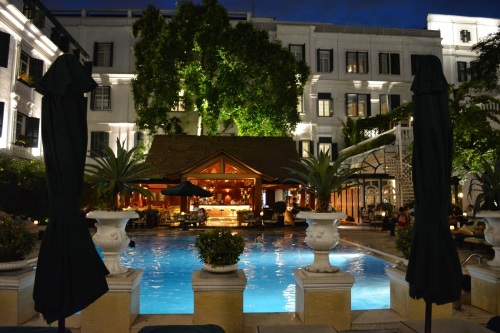 It’s what makes travel so much fun.

The next day our tour started in earnest.  We met with our tour director and he told us that our first tour of Hanoi would be through the old city by cyclo which is a sort of cycle rickshaw.  We all trudged outside the Sofitel to see a host of cyclos parked into front of the hotel and I sighed a sigh.  Oh no – is this a super touristy thing to do.  I hesitated – should I go or not?  Oh, what the hell?  I might as well.  I climbed into the cyclo seat the guide directed me to.  My driver gave me a big toothless grin and nodded – he clearly did not speak a word of English – and with that he pushed on the pedals and we were off. 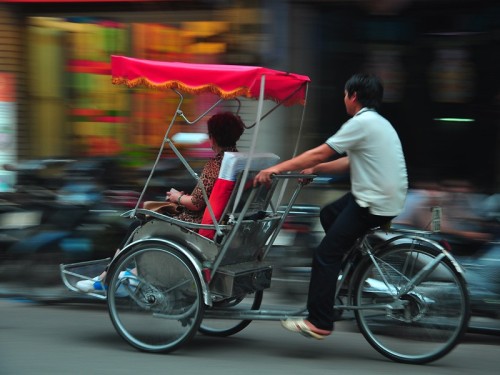 Oh, my goodness…. it was surreal.  I was all on my own with my driver sitting on the bike behind me as we glided through the tiny cluttered streets of old Hanoi.  I felt invisible.  There was no sound of the bike and with the driver behind me it had the effect of floating along on my own – almost like a ride at Disney – except everything I was seeing was real.  Families on the pavement sitting on their haunches eating bowls of pho.  Shopkeepers selling fruit and soup and bicycle parts and silk scarves.  Scooters wove in and out of the pedestrians and vendors on bicycles with impossibly high bundles of woven hats and baskets for delivery competed for space.  It was the most incredible experience and I nearly missed it because I thought it was too touristy.

Eventually we were on the Mekong on our luxury river cruise vessel and from the comfort of the deck we were able to watch the commerce on the Mekong – the easiest and quickest way to move goods and people.  Each day we would go on tours from the ship on smaller boats and travel down the tributaries of the Mekong.  One such day our skipper pulled the small boat over to the river bank.  I was puzzled.  I wondered why we were stopping there as there was nothing that I could see except high, steep rather muddy river banks.  He skillfully secured our boat to a tree trunk and then gestured as if to say, “Come on then – you wanted to see Vietnam – well here it is.”

With the help of the crew we scrambled up the river bank and emerged, through the bushes, into the middle of the busy thoroughfare of a traditional Vietnamese village.  Oh wow!  But here’s the thing.  We became the attraction – not the other way around.  Children ran out of the little houses to peer at us – some hid behind their mothers.  Young mothers smiled shyly and brave young kids ran up to say Hello Lady and practise their English.  Even the very elderly came out to say hello.  What a strange and delightful experience. 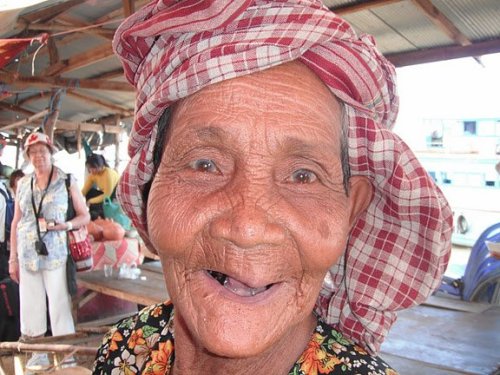 This entry was posted in Uncategorized. Bookmark the permalink.

2 responses to “EXPECT THE UNEXPECTED”