How to be a bitch without really trying….

It’s cold here in the Netherlands – and Belgium.  But is it ever gorgeous.  I am river cruising on AMAWaterways and have visited beautiful little spots like Volendam, Edam, Gent and Brugges.  We want for nothing on this cruise.  Food is amazing, wine is premium brand and plentiful – and yet – you just can’t please some people and it still continues to amaze me.

Tonight the chef hosted a dessert buffet after dinner upstairs in the lounge.  An extravaganza of chocolate, cakes, ice cream, eclairs and goodness knows what else.  Ms B. (guess what the B stands for) got extremely irritated because one of the other guests was having her photo taken with the chef and it was getting in the way of HER photo opportunity.  Oh well.  Deal with it sister.

The next moment I saw Ms B. was when another lady was leaving the buffet with (I will admit) a heavily laden plate of sweet goodies.  Now you know the rule ladies.  We all pig out and when a sister does this you turn the other way and say nothing!  Ms B. does not know that rule.  “Are you sure you have enough on that plate?” she asked sarcastically.  I was a bit stunned but was sure that the victim must at least be in Ms B’s circle of “friends” and not a complete stranger.  Nope.  Wrong again.  The victim is seemingly another guest or acquaintance with a sweet tooth and not necessarily in Ms B’s party.

I am still speechless.  Maybe there are issues that I don’t know about in Ms B’s life that make her… well… bitchy.  Maybe she has a reason to be so sour.  Who knows?  What I do know is that it takes so little to be kind and such a lot of bile to be mean.

Begging for mercy from King Neptune

Are you a Pollywog or a Shellback?

Well if you have crossed the Equator before then Neptune would deem you to be a trusted Shellback.  If you have not crossed, however, then you are nothing but a slimy Pollywog and will be summoned to Neptune’s court for punishment.

I had heard of this ceremony from my father who served many years in the Royal Navy.   Actually witnessing the ceremony is something else.  The newbies on the crew (pollywogs) who had been chosen to be  initiated were a bit nervous about what to expect.  And they were justified in this.  King Neptune came aboard and dished out punishments irrespective of whether the accused cried out “Not Guilty”.

“What shall the punishment be?” he shouted out to the crowd.  “The Barber or the Butcher?”.  Both these good “gentlemen” were waiting at the pool side suitably armed with saws and giant razors all covered with large quantities of tomato sauce for effect.  The butcher was equipped with scrubs, a stethoscope and great buckets of spaghetti (posing to be innards) plus the odd chicken bone. 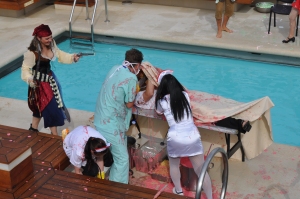 It was great entertainment all round with the Captain joining in.  At the end of the punishment a whole fish was presented to the poor pollywog and the crowd chanted – Kiss the Fish, Kiss the Fish.  If you are interested you can read more detail of this old naval ceremony on wikipedia.  Believe it or not, it dates back hundreds of years.

Yes I kissed the fish

Luckily only the pollywog crew were picked on – none of the guests.  We did however receive a great certificate signed by the Captain which will be proudly displayed over my desk.

Sadly this was to be my last day on Seabourn.  I have not been on a cruise where I felt so much part of the family – both fellow guests and staff.  We made some wonderful new acquaintances and met people from so many different and interesting walks of life.  The ship is so intimate there is always the opportunity to exchange stories about our home towns, children and grandchildren.  The staff and crew are exceptional.  There is no other word for it and the reason why Seabourn consistently receives so many awards :  such as