Just because you are an elite flyer doesn’t mean you can behave any which way.  Aeroflot has had to discipline its elite members because they are just behaving badly.

On its website recently it published the following announcement –

Moscow, 6 March 2018. – Aeroflot will revoke the Aeroflot Bonus elite status and associated privileges from passengers who violate the rules of conduct during pre-flight services and on board its aircraft. Any miles accrued while participating in the loyalty program will be voided, and the participant’s account will be closed.

Aeroflot has seen an increase in cases of disruptive behaviour on board its aircraft. Since the beginning of 2018 alone, there have been nine cases of physical violence against employees of the airline. Closer scrutiny of these incidents has revealed that virtually all the disruptive passengers were elite-level participants in the Aeroflot Bonus loyalty programme. A number of silver, gold and platinum Aeroflot Bonus card-holders consider it acceptable to treat the airline’s employees as second-class citizens, behaving not only rudely and aggressively but also in some cases resorting to violence.

So what led to this?  The bad behaviour is worse than you can imagine.  A flight attendant who is a contributor to The Points Guy news website commented online –

“I’ve been told to go f— myself because I had run out of a meal choice, heard a colleague called a horrendous homophobic slur for asking a passenger to get off her phone while we taxied to the runway, and had another colleague spit at for tripping over a passenger’s leg (that was dangling out in the aisle) and waking him up. I’ve even seen a mother throw a dirty diaper at a crew member because the crew member wouldn’t collect it from her without gloves. This behaviour is simply not acceptable.”

Just for a moment let’s compare economy with first class …

There’s cool … and then there’s uncomfortable

This is not a new phenomenon apparently – Sid Lipsey summed it up pretty well in an article dating back to January 2016….

“There is a class of entitled travelers that don’t just believe that they deserve to be treated better than the rest of us; they believe that they are better than the rest of us,” says Christopher Elliott, travel journalist and founder of the travel site elliott.org. In a column Elliott wrote for USA Today, he discussed the growing phenomenon of “silver spoon travelers” — a class of travelers who believe their elite platinum or gold loyalty program status, their insane collection of airline miles and/or their very presence in first class entitle them to lord it over airline staff and fellow passengers. And the stories Elliott told are shocking aerials tales of “oh-no-they-didn’t” audacity.

Take one passenger, Camille Jamerson, who told Elliott she was once “ordered” to give up her first-class seat by a fellow passenger who said he had Medallion status and, therefore, wanted to move his friend from back in economy class to Camille’s seat. “That didn’t happen,” Camille told Elliott.

And there was an airline employee, Brian, who told Elliott of an incident at the gate where 90 people, many of them with some sort of elite status on the airline, were competing for 22 seats on the upgrade list. “The scene at the podium can be fun to watch,” Brian told Elliott. “Grown men and women acting like children when they don’t get their upgrades.”

We hear tales galore of air rage in cramped economy class flights but tantrums in first class is a bit much people!  Just kick back in your pod and chill!

Courtney Love was arrested at Heathrow Airport in 2003 after Virgin cabin crew reported her for “verbally abusive” behaviour. Police were called before the plane landed on the overnight flight from Los Angeles, where Love, then singer with the band Hole, was travelling in a Virgin Upper Class Cabin.  (from traveller.com).

Looking forward to my next economy flight – there are some benefits to being 5 ft short! 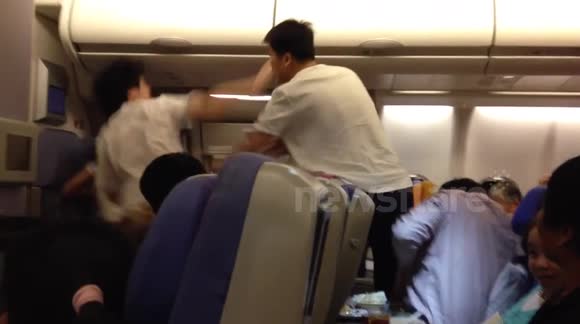 We all know that flying can be stressful.  Do we need gadgets to make it even more stressful.  I am talking about the awful “Knee Defender”.  What possible use can this thing have if not to aggravate your fellow passengers.  If you don’t know what the Knee Defender is then here is a picture of the villain.

Now honestly.  I know some people can be a pain in the derriere when it comes to reclining their seats.  It seems as if they recline not just to sleep but instantly the plane takes off.  Usually a good flight attendant will ask those recliners to put their seat upright during meal service.  Which makes sense.

United said that a male passenger seated in Economy Plus – an area of the plane which boasts four inches of extra leg room – decided to use the gadget so he could work on his computer.

All was probably well, until the woman tried to decline her seat and couldn’t. Presumably after words with his fellow Economy Plus traveller, he was asked to remove it by airline staff – and declined. The woman in front then threw water at him, at which point the plane was diverted to Chicago and the passengers – both 48 – were removed.

They then were able to enjoy all the legroom they wanted while they arranged alternative travel plans.

The FAA said that neither passenger was arrested, and are unlikely to be fined. And given the maximum fine for unruly passengers is $25,000 in the US, that’s got to count as a win…