What a shame!  The Carnival Triumph is anything but triumphant.  That makes me sad.  It seems just the only day that the new Destiny class was launched by Carnival Cruise Lines with the Carnival Destiny in 1996.  The Triumph was launched a couple of years later.  The Destiny was the largest cruise ship in the world at that time – over 100.000 tons.  The Triumph weighed in with an additional 300 tons and one extra deck. 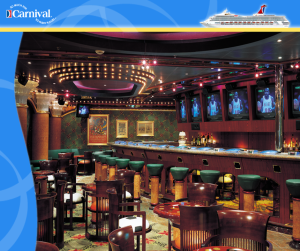 Extract from one of my consumer shows in 2004

I was on one of the inaugural sailings of the Triumph – a short trip out of San Francisco.  It was quite a thrill cruising out under the Golden Gate Bridge wondering if we were actually going to make it.

Now it’s a sad old broken ship that nobody wants to be on any more.

Even before the disaster she had been relegated to the 3 and 4 day “party cruise” route out of Galveston.  These cruises can be notorious and not popular with the staff who know that with cheap cruises like this the tips are going to be equally skinny.    Yet the staff were praised by all affected on the Triumph and that’s a good thing because working on a cruise ship is not glamorous.  For a fascinating inside peek at what the job is like read this excellent article http://www.cruisecritic.com/articles.cfm?ID=1059

So here’s to the cruise staff for doing an amazing job.

Here’s to the poor people whose little vacation break was ruined.

And here’s to the Triumph.  RIP.