So talk about a vacation with your friends and no doubt the usual destinations will be discussed – Mayan Riviera vs Puerto Vallarta, Bahamas or Hawaii and of course Italy,  Italy, Italy.  How about spiking up your next conversation by telling your friends that you are thinking of going on holiday to these weird and wonderful places.

Tashirojima Island …
where?  Just off the coast of Japan – this is home to just 100 people and well thousands of cats.  Really – just look at this –

Nobody really  knows how many cats are there – but this picture is enough to give my husband asthma.  This is definitely a place he could not go.

Okunoshima Island
This would be a bit better – no cats but hundreds of rabbits.

Snake Island (Ilha da Quemada Grande)
Off the coast of Brazil this island is full of venomous snakes.  It is so dangerous that the Navy has forbidden anyone from landing there – so I guess you will have to cross that off your list. 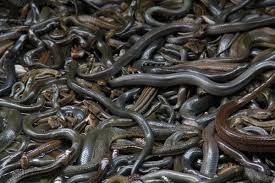 ICE HOTEL SWEDEN
Or how about a few days in the Ice Hotel in Sweden.  Check out these rooms.

I dunno…. I’m not feeling this.

No – this was a bad idea. Forget I even included this hotel.  Too much ice and snow in Calgary anyway.  Looks a bit like a scene out of Game of Thrones.

An old mining site for potash its daily temperature is 45 degrees celsius.  That hot enough for you?   It is pretty much deserted now except for the local people known as Afar.

Come on, I dare you.  Just throw it into the conversation…. very casually.  And remember, don’t laugh when you say it.