Flying – that is.  What was supposed to be the longest scheduled commercial non stop flight at 17 hours and 15 minutes actually took less time in the air at only 16 hours and 24 minutes so it still came second to the Qantas flight from Dallas to Sydney at 16 hours and 55 minutes.

Whichever way you look at it – that’s a LONG time to be in the air.   There are many tips and hints on the internet on how to pass time on such a long flight.  The most ridiculous I read was to use the inflight magazine and then make paper hats and use the aisle as your “runway” to exhibit these to your fellow passengers.  That’s the most ridiculous thing I have ever read.  Can you imagine?  Talk about asking the co-pilot to come out with restraints !!

While I was searching the internet on that I came across someone who made a hat out of the toilet seat cover and took a self portrait in the toilet.  Yup…..that’s what I call bored.  The devil finds work for idle hands. 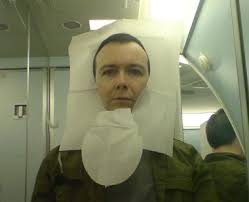 Believe it or not some people relish the time on long flights – catch up on reading, film watching, sleeping …. all those activities that many busy people never have time for.  That’s why we absolutely must not have wifi on flights – please no!  I really like having a good excuse for not checking my email.  Right?

There’s only one thing worse than the world’s longest flight – and that is the world’s shortest flight which takes place between the two Orkney Islands, Westray and Papa Westray, just north of Scotland, separated by a distance of only 1.7 miles. Operated by Loganair, the flight duration is officially two minutes, but under ideal wind condition can be completed in only 47 seconds.  So my question is how much time does it spend parking at the airport, waiting in the line up, going through security etc.?

But perhaps they don’t have all that hassle at a small airport like Westray.

I think most people will agree that it is not the length (or otherwise) of the flight that can be the most vexing – it is the time it takes to get on and get off.  It always amuses me at the end of a long flight the minute we land, taxi in and the seat belt light goes off the whole plane (almost) rises in unison and starts getting ready to get off.  Carry on bags out, seat back pocket checked, jacket on, standing up.  Never mind that you are in row 32.  No point in standing up – you definitely cannot get off the plane until the people in rows 1 through to 31 get off.  Never mind – it makes you feel better.  I know – because that’s me.  I do it ALL the time – and it’s so easy because even in a window seat I can stand up without having to duck my head.  Unlike some of my fellow passengers ….