If you love history and you love ships I can bet that whenever you go to a destination if you get the chance you will tour a ship – either modern or ancient.  If you go to England you must try to divert down to Portsmouth and do a tour of the HMS Victory – Nelson’s flagship.  This ship has been lovingly restored and gives a real feel for what life was like on board….

and where did the great Admiral lay his head at the end of the day?

Nelson’s made to measure cot hanging between the gun placements.

When touring the lower gun deck you can really just imagine being out there in battle and there is a place on the deck marking the spot where Nelson was wounded.

It was therefore with great anticipation that I was able to tour the USS Midway in San Diego accompanied by a veteran who had been on many missions on this very ship.  I was particularly interested because my father served in the Royal Navy and spent many months away from home when we were growing up.  It was always exciting when he came home slim and suntanned (sometimes we didn’t recognise him) with exotic gifts of Chinese pyjamas, Lebanese dolls and little Egyptian camel toys.

If you are in San Diego this is really worth a visit and I love the statue in front of the USS Midway depicting that famous Kiss of Peace.

Our Veteran guide had some great stories to tell about life on board – some of which I could not repeat – but he had us laughing with his recollections.

Another interesting place I visited on a different trip in France was the ghostly WW2 submarine pen built by the Germans in Bordeaux..  This was a handy place to tuck away the subs while they replenished supplies and ammunition – well out of the way of the Allied forces. 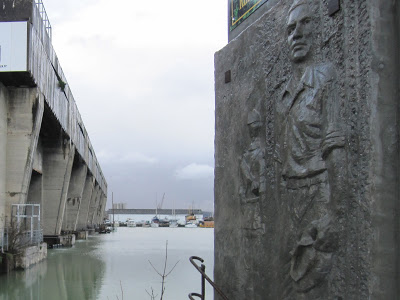 Construction work on the bunker was only complete in mid 1944. It is estimated that up to 6,000 workers, mainly prisoners of war, worked relentlessly day and night in merciless conditions. While a popular urban myth suggests that some fell into the depths of the building’s foundations where they perished as the concrete slowly set around them (today most authorities do not believe that to be factually correct), it is true that many of the construction workers died in accidents, of exhaustion, or drowned. A solemn memorial has been erected in tribute to those who took part in the construction, and particularly to those who lost their lives

And of course I would be remiss not to mention the USS Arizona – a pilgrimage site for many who visit Honolulu.

During the Japanese attack on Pearl Harbour on 7 December 1941, Arizona was bombed. After a bomb detonated in a powder magazine, the battleship exploded violently and sank, killing 1,177 officers and crewmen. Unlike many of the other ships sunk or damaged that day, Arizona was irreparably damaged by the force of the magazine explosion, though the Navy removed parts of the ship for reuse. The wreck still lies at the bottom of Pearl Harbour and the USS Arizona Memorial, dedicated on 30 May 1962 to all those who died during the attack, straddles the ship’s hull.

I encourage you to visit these great ships whenever you have the chance.  Entrance fees and items on sale are generally for the benefit of veterans.