Maybe you heard about the two girls denied boarding on a United Airlines flight because they were wearing leggings.

After this was reported then Twitter got involved in the act – as it usually does – (“Sad!)

Lots of comments were posted by people who said that this was discrimination against these poor girls’ clothing choice.  However you have to remember that these girls were travelling on a “pass” from United Airlines which means that either they were employed by the airline or were relatives or friends of an airline employee.

Now this is not something new that United suddenly pulled out of its hat to make life difficult for these girls.  Their policy is quite clear and for those interested these are the guidelines. 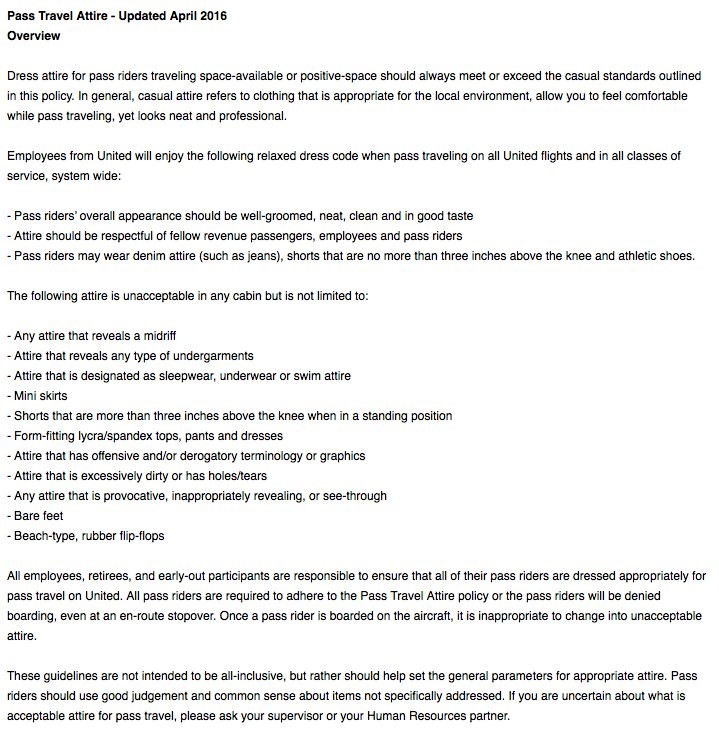 It always makes me chuckle (or sometimes grimace) when I see posts on facebook where someone is asking their wide range of acquaintances for a buddy pass.  As a travel agent I do not get the same benefit as the friend of an airline employee. I have paid for just about every airline ticket I can think of.   Contrary to popular belief – being a travel agent does not open the door to free travel.

I was on a Westjet flight once from Nassau where a small group of friends were travelling on buddy passes.  They were all pretty badly dressed but the one guy had some weird bandana type headband / hat.  The flight attendant (knowing that they were using buddy passes) asked him to remove his headgear.  He refused.  She asked him a couple of times and then had to ask the Captain to come down and ask him.  When we got off the flight in Calgary the police were waiting.  Hmm.

Now for paying passengers they can wear what they like – almost.  There has been a lot in the press about people being denied boarding because of wearing shirts with swear words or bare midriffs but honestly there are a lot of people getting on flights and then taking off their clothes – and I would rather have leggings than this….