Mosquitoes are strange creatures. It seems that there are different varieties all over the world with very different patterns of behaviour.

Now you would think that they would be worse in hot tropical locations – but that is not my experience.  I grew up in South Africa and of course mosquitoes are very common there.  But .. we were only bothered by them at night.  So all the houses in South Africa had mosquito netting on the windows and every night as the sun starting going down you prepared yourself for the evening.

My Dad used to call it Mozzy Time!  He would go around the house closing windows and making sure those pests couldn’t get inside.  Thing is he was just neurotic about anything that flew or crawled.  The mosquitoes were not a problem at all.  The drill was if you are sitting outside just spray some Peaceful Sleep

on your exposed arms and legs and you are done!  We entertained outside on the verandah with no problem at all.

We also did a lot of camping and again the same precautions would come into play.  Even the little ones would play outside well into the night with minimal problems.  Of course there were the odd mozzy bites which were a nuisance but for the most part it was no big deal.

One camping weekend trip I realized that I had left the tent at home.  No problem – we used the jib from our sailing dinghy and erected a temporary shelter – slept on the grass under the stars.  With the help of the ever handy Peaceful Sleep we had an undisturbed night (except for when a huge monitor lizard scrabbled through the grass next to us on his nocturnal jaunt).

So when we decided to emigrate to Canada I thought well, I can deal with the snow and the cold and at least there won’t be any mosquitoes.

WHAT?  Was I ever wrong.

My goodness me.  Where do these creatures come from?  First of all they are massive compared to our little African fellows.  They are also slow.  Our African chaps zip around so quickly it would be hard to swat one and they are difficult to see in any event.  These Canadian mozzies seem to be in slow motion in comparison. They also have no decent sense of time.  Any self-respecting mosquito would realise that you don’t hang out during the day looking for a blood snack.  Rest up during the day and then come out when the sun goes down.  That’s the procedure.  Didn’t they read the manual?

It makes me chuckle when people talk to me about travelling to exotic locations and very often the first question is “What about bugs”.  Seriously?  Have you ever been out in the Canadian wilderness?  Just google Canadian bugs and you might not go out again.  Along with mosquitoes we have stink bugs, black flies and spiders galore.  I found this interesting article …

Even the web site of the Salisbury Morse Place School states:  “Winnipeg is [incorrectly] known the “Mosquito” capital of Canada.  The mosquito is jokingly considered Manitoba’s provincial bird!!!” In reality the capital designation rightly belong to Komarno, Manitoba, about 70 km north of Winnipeg.  In fact the name Komarno is Ukrainian for mosquito.  There is a 4.6 meter statue of a mosquito, built in 1984 in Komarno.  Apparently the town is now saving up for a big bug zapper. 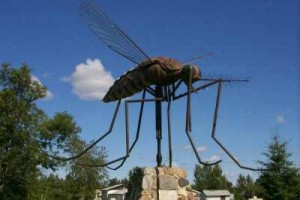 And how about Deer Flies – heard of them?  “Deer are nice and flies aren’t so bad, but deer flies are nasty — something you already know if you’ve ever been camping in Canada. These knife-jawed bloodsuckers will saw through your skin, drink your blood and leave you nothing but pain and a potential allergic reaction for your trouble. Nice.”

Mmm – let’s put the sleeping bags on Kijiji and sell them.  As a friend of mine once said “The closest I get to camping Darling, is staying at the Holiday Inn”