Following upon yesterday’s blog about the craziness of twitterdom I laughed when I read an article about a twitter account named #unitedairlanes which has nothing to do with United Airlines.  People were sending their Angry Tweets to this handle and getting hilarious replies from the pseudo United rep –

ANGRY TWEET – Shout out to @unitedairlanes for stranding my wife at YWG for nearly 12 hour for a short flight to Chicago. Excellent service.
RESPONSE – After the first six hours, she technically belonged to us. You’re just lucky we met our monthly quota.

or this one….ANGRY TWEET – Hey @unitedairlanes Our new player Clint wasn’t on the flight to EWR. Can you double check stowage?

RESPONSE –  The crew’s telling me that he’s back here, and he’s scared. Somehow got himself locked into a pet carrier and flat-out panicked. 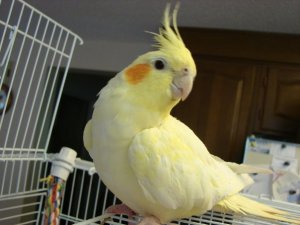 You’d think people would check before they tweet.  I think birds are smarter than people.  My cockatiel Pepe thinks so too!  He doesn’t tweet indiscriminately like some of these people.  If he tweets it’s for a reason.  He lets us know when someone is coming up the driveway or if we forget to turn the light off when we go to bed (has to be dark for him to sleep).
There are some intelligent tweets – like those of Chris Hadfield – one of his had me thinking for a while – “Growing up, I memorized the planet names by “My Very Educated Mother Just Served Us Nine Pizzas”. Without Pluto, what should we use instead?”
So maybe there needs to be an intelligent version of Twitter – how about naming it after cats.  (Not my idea – this comes directly from Nala the cat after a crazed evening on catnip.)

She thinks there should be a new service called Putty Tat.   The basic premise would be that any Tattles (can’t call them Tweets can we) would be devoted to issues such as sleep, food, birds, squirrels and catnip – not necessarily in that order.