A common complaint from travellers is that they don’t like having to go to places where people don’t speak English.  Now first of all this can be tricky if you want to travel outside of North America….but not impossible.  Many people – especially younger people will have a smattering of English due to the internet, pop songs, movies and much more.  I think the concern of North American travellers is that they don’t want to be on a tour with multiple languages.  If you have ever experienced that it is a bit annoying to have numerous announcements in English, French and German.

But what about the places where English is the local language – it might not be the English you recognise. 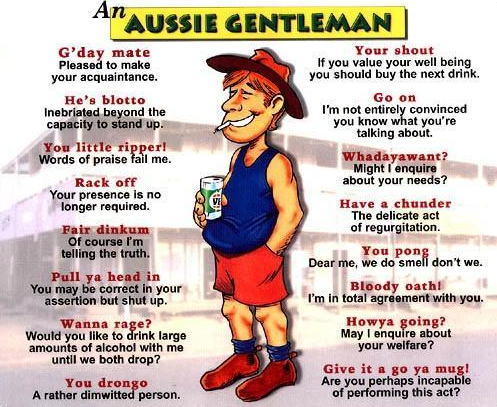 A lot of what you hear in Australia probably has strong British roots.  You will be quite comfortable with G’Day.  That’s pretty easy to recognise.  You might be a bit more puzzled if you hear a local talking about his “ankle biter” – nothing dangerous here – it’s just a slang expression for small child.  You might want to take notice on the beach if someone warns you to watch out for the “blueys”…nasting stinging jelly fish and if you are offered a “cut lunch” – it’s ok, it’s only sandwiches.

It gets more complicated in Britain – especially in London – due to Cockney rhyming slang.  If you ask how much something costs you might be told a Lady Godiva (a fiver)… usually shortened to just Godiva.   Your tour guide might tell you he will back in a minute – just going for a Laugh and a Joke (which means a smoke).

Yes – you people speak funny too!  To an immigrant in any event.  I was very comfortable moving to Canada in the mid 90’s.  No new language to learn – so I thought.  How wrong I was.  In the height of the summer I decided I needed a new bathing suit.  We did not call it a bathing suit in South Africa (or England for that matter).  We called it a swimming costume (known as a cozzie for short).  I went to Sears and asked where I could find the costumes.  The lady was bewildered.  We don’t get those in until a week or two before Halloween.  Whaaaat?

I went to Walmart and asked where could I find rubbish bags.  The lady told me that all their bags were of good quality.  No, I explained.  I want them for throwing out the rubbish.  Ooooh! she said – you mean garbage bags.  I guess I did.

And when we do travel into more exotic climes then our kindly hosts do try to accommodation us by translating signs into English – or nearly English – with some hilarious results.